Current Research (in no particular order) 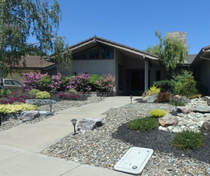 Residents in water-limited cities are increasingly transforming their lawns to drought-tolerant vegetation or other land covers, often spurred by municipal incentive programs. How will this water conservation strategy impact the ecological characteristics of the urban environment? This project investigates the distribution and attributes of transformed yards across the city of Sacramento, CA, in order to address questions related to temperature and vegetation dynamics, as well as social and biophysical drivers of lawn transformation.

HERCULES land cover map
We continue to develop and test the HERCULES land cover model to investigate whether the function of urban ecosystems is linked to the spatial heterogeneity of those systems.  Urban landscapes are physically heterogeneous at very fine scales, and this heterogeneity results from a complex combination of built and non-built components such as vegetation, buildings, and pervious and impervious surfaces.  Existing urban classifications, which are commonly pixel-based and focused on land use/land cover, inadequately capture structural heterogeneity.  HERCULES (High Ecological Resolution Classification for Urban Landscapes and Environmental Systems) is a patch-based classification that focuses on land cover -- the physical structure of the system -- rather than land use.  Key HERCULES publications include: 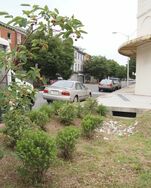 Is green infrastructure a universal good?

Green infrastructure is widely promoted as a component of urban sustainability plans and strategies, yet it is not known whether the assumed benefits accrue to underserved neighborhoods. The CLUE lab is part of a collaborative project that seeks to document the biophysical and social context of green infrastructure projects in Baltimore, MD, and also to understand how these projects relate to the desires, perceptions, and capacities of various neighborhoods, including those that are underserved. This project uses green infrastructure as a platform for better understanding the relationships between environment, health, and poverty in cities. 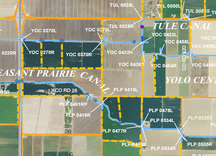 Intensive agriculture in the California Central Valley has resulted in the loss of ~95% of riparian habitat. In addition, small streams have been re-engineered or replaced by agricultural ditches to convey irrigation drainage high in nitrate (NO3) and other water quality concerns. These networks of semi-natural, semi-novel waterways permeate cultivated landscapes, but are rarely examined from an ecological perspective. This research aims to address if and how small agricultural waterway networks and their riparian habitat influence N fluxes in this semi-arid irrigated landscape. To address this question, we examined interactions between riparian vegetation, channel geomorphology, flow variation, riparian soils, channel sediments, suspended sediments, and surface water NO3. 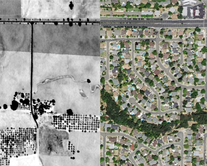 Riparian canopy change along headwater streams near Sacramento, CA
Urbanization is generally thought to reduce riparian tree canopy cover—and, consequently, the many ecosystem services provided by riparian trees—but this outcome may vary depending on geographic and historical context. We examined the relationship between urbanization and riparian tree canopy near Sacramento, California, a city with a Mediterranean climate that was heavily impacted by agriculture before urbanization. We used aerial imagery to quantify changes in land cover and riparian tree canopy between 1937 and 2014 for an 85-square-km watershed located in the Sacramento suburbs, and also explored potential drivers of these changes using stream gage records and field sampling of vegetation and dry-season stream flow. 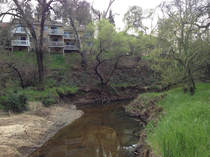 Past Research (in no particular order) 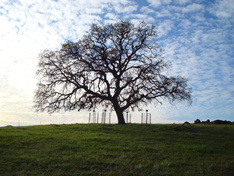 Throughfall collectors under an oak
The processes that control N inputs vary over multiple scales; at the regional scale, urbanization and intensive agriculture can lead to enhanced N input to adjacent wildlands and within local sites, heterogeneity in vegetation structure influences N deposition rates. Using 6 sites across the north-central California, we quantified N inputs to oak savannas and confirmed a regional scale gradient in N deposition and that oak canopies are hotspots of N deposition within a site. The ultimate goal is to determine how regional and local heterogeneity influence plant community response to N deposition. Because many environmental factors, such as soil type, climate, and light, vary at the regional and local scale in addition to N deposition, a combination of observational and experimental approaches were used to understand plant community response to N deposition in these systems. Key publications from this research include:

Sampling a Sacramento stream
Water and nitrogen retention in Sacramento residential drainsheds
Does land cover, rather than land use, better explain observed variability in water and NO3 export to streams during both base flow and winter storm flows? We quantified discharge and NO3 export from 9 residential watersheds and one reference watershed. The residential watersheds differ substantially in land cover, which is classified using HERCULES. These watersheds also move water around primarily through infrastructure that may cross topographic boundaries. Therefore, using below-ground infrastructure maps, we delineated drainsheds for this study.
Read more: 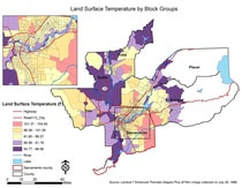 Variation in land surface temperature, Sacramento County
Is everyone hot in the city?  Land cover, socio-economic factors and heat dissipation in Baltimore and Sacramento
​The urban heat island (UHI) describes the difference between urban and non-urban ambient air temperature, which are directly related to land cover and human energy use. In addition,  residents are exposed to different amounts of heat, an environmental justice concern. The duration and magnitude of the temperature differential between urban and non-urban surrounding areas depend on the spatial heterogeneity of vegetation, building, paving materials, and the morphology of the system. We investigated whether HERCULES better predicts land surface temperature than standard land use/land cover classifications. Read more:

Setting up the tracer experiment
Lawns are a significant component of urban land cover throughout the U.S.  They are embedded in a savanna-like structured urban environment – mix of trees, buildings, etc. – which creates heterogeneity in ground light levels. We ask how N retention and loss dynamics in lawns are affected by light availability and, by extension, coupled carbon and nutrient cycling. Light availability is expected to affect a suite of ecological mechanisms that are responsible for multiple ecosystem services or disservices generated by lawns. To read about results of the study: 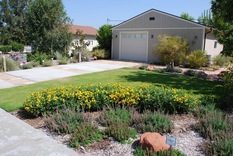 Experimental landscape
How can landscapes in urban and sub-urban areas be designed and managed to minimize negative environmental and social outcomes while maximizing positive ones? We examined relationships and potential tradeoffs between aesthetic preferences of residents for vegetation and hardscape in their yards and water conservation best management practices.

Soil lead concentration map of a residential yard in Sacramento
Sacramento Lead and Urban Gardening Project (SLUG)
Urban gardens provide a local source of nutritious food and can help to strengthen community ties. However, there are tradeoffs to gardening in the city, including potential exposure to soil pollutants. Lead in soil is a lesser known source of lead exposure but it can adversely affect humans, especially children, if it is accidentally inhaled or ingested. Older neighborhoods, often occupied by low-income communities and communities of color, are burdened with the highest soil lead levels. These are often the same neighborhoods with limited access to fresh fruits and vegetables. Despite being located in one of the most productive agricultural regions of the world, some neighborhoods in Sacramento are considered food deserts. How can residents manage for multiple ecosystem services by safely growing food in their yards and minimizing their potential exposure to soil lead? As a collaborative team of natural and social scientists in partnership with local non-profit organizations working to install food-producing gardens, we tested soil for lead in an effort to support gardening in the safest way possible by informing garden placement within the yard. We also critically explored the process of community-university partnerships, and the history and perspectives of soil lead in Sacramento. For more information:

Riparian boundary structure and function in the Shingwedzi Drainage