Current lab members (ordered by length of time in the lab) 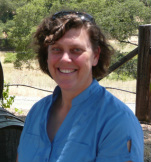 Mary is a native of Oakland, California, and  after completing a biology degree at the University of Santa Clara, she worked as a botanist with an environmental consulting firm in the Bay Area before returning to graduate school at Rutgers University and earning Ph.D. in Ecology and Evolution in 1998.  She was a post-doc at the Cary Institute of Ecosystem Studies in Millbrook NY and a founding member and co-PI of the Baltimore Ecosystem Study, LTER.  She spent 2 years as a visiting scholar at the School of Forestry and Environmental Studies at Yale University before joining the UC Davis faculty in 2006.  The primary thread that weaves through all of Mary's research is a concern with linking landscape pattern to ecosystem function and understanding how human activities alter that link.   Her research spans systems and scales and she works in the oak savanna and high alpine of California and the metropolitan regions of Sacramento and Baltimore.  Click here for Mary's CV.
Email: MLCadenasso@ucdavis.edu

Joanna originally joined the CLUE lab as a graduate student and is now a postdoc working on the Baltimore-based “Is Green Infrastructure a Universal Good?” project. Joanna is fascinated by the complexity and variety of urban ecosystems, and her graduate research focused on riparian plant communities and soils along small streams with altered hydrology in Sacramento, California. A Massachusetts native, Joanna earned her BA in environmental studies from Vassar College and worked in educational publishing and non-profit outreach and communications before joining the CLUE lab in 2012. She earned an MA in geography in 2016 and a PhD in ecology in 2018.
Email: JSolins@ucdavis.edu

Jasmin Green, Ph.D. Student
​
Jasmin grew up in the Chesapeake Bay watershed, stirring her curiosity from a young age about how individual actions can have large-scale impacts on the environment. She attained her BS in Biology and Environmental Science at The College of William and Mary in 2015, where she conducted research on the viral ecology of freshwater ecosystems, focusing particularly on the effects of storm water runoff in suburban neighborhoods. Her interest in the influence of human structures on the natural landscape led her to join the CLUE lab in 2017, where she is pursuing her PhD in the Graduate Group of Ecology.
Email: JAGre@ucdavis.edu

Victoria is motivated by the dynamism of urban ecosystems and by the potential for solutions-oriented science to drive policy. She graduated from Boston University in 2015 with a BA in Environmental Science and a minor in Public Health, before working in the environmental nonprofit realm in Boston and NYC. Victoria joined the Graduate Group in Ecology and the CLUE Lab in 2019 and will build upon her undergraduate research on urban street trees as she investigates the relationship between changing urban vegetative landscapes and localized heat.
Email: VKDearborn@ucdavis.edu
Former lab members -- Graduate students
Former lab members -- Postdocs
Former lab members -- Technicians